Purpose:
The U. S. Nuclear Regulatory Commission (NRC) will meet with the public to discuss the NRC’s assessment of safety performance at Three Mile Island Nuclear Station, Unit 1 for 2012, as described in the annual assessment letter dated March 4, 2013. The NRC will respond to questions on specific performance issues at the plant and our role in ensuring safe plant operations.

Download PDF
Posted by efmr at 8:20 PM No comments:

Peach Bottom - Transmittal of Draft Safety Evaluation for Proposed Amendment Re: Relocation of Pressure and Temperature Limits Report (TAC Nos. ME8535 and ME8536)

Peach Bottom Atomic Power Station, Units 2 and 3 - Transmittal of Draft Safety Evaluation for Proposed Amendment Re: Relocation of Pressure and Temperature Limits Report (TAC Nos. ME8535 and ME8536)

On behalf of the Steering Committee, the Susquehanna River Basin Commission is pleased to announce its first-ever Susquehanna Water  Science Forum – From Science to Sustainable Water Resources Management. The Forum will  bring together water resource professionals and researchers to share current water resource  research, prioritize research needs and better coordinate activities in the Susquehanna basin.

REQUEST FOR WITHHOLDING INFORMATION FROM PUBLIC DISCLOSURE FOR PEACH BOnOM ATOMIC POWER STATION, UNIT NOS. 2 AND 3 (TAC NOS. ME9631 AND ME9632)

Epstein to speak at NRC on Emergency Preparedness

Session Title and Description:  Promoting Success for Emergency Preparedness Guidance
NUREG-0654/FEMA-REP-1, “Criteria for Preparation and Evaluation of Radiological Emergency
Response Plans and Preparedness in Support of Nuclear Power Plants,” was issued in 1980.

Public meetings occurred in August and September 2012 to engage external stakeholders.
More public meetings and comment periods will occur throughout the planned timeline, currently
extending until 2017.  This session is targeted to complement these ongoing efforts by providing the
current status of the NUREG?0654/FEMA-REP-1 revision project.  Key questions that the NRC
and FEMA posed during the 2012 meetings will be used to encourage discussion, including “

How do stakeholders define success  with respect to the guidance revision?”

TMI - Request for Additional Information Regarding 30-Day Report for Emergency Core Cooling System Model Changes Pursuant to the Requirements of 10 CFR 50.46 (TAC No. ME8237)

The report provides a summary of the determinations and conclusions reached during the NRC’s scoping process for the Waste Confidence generic environmental impact statement (GEIS).  The report also contains a summary of the comments received and the NRC’s responses.  A second document (ADAMS Accession No. ML13060A130) contains scoping comments organized by category:  http://pbadupws.nrc.gov/docs/ML1306/ML13060A130.pdf.

We have documented our last public meeting:
Also, we have announced our next monthly public teleconference status meeting.  The focus of this meeting will be the scoping summary report.  Participants will be provided an opportunity to ask clarifying questions on the scoping summary report.  Please note that discussion in this forum will not be considered as formal comments and will not be considered in the GEIS development.

Attached is the stand-alone executive summary and full report for "The NRC and Nuclear Power Plant Safety in 2012: Tolerating the Intolerable." They are being released on Thursday, March 7, 2013 at noon eastern time and we ask that the information be embargoed until then.

As in past reports, this year's report contains a section summarizing the "near-misses" last year - times when an event or discovery at a plant prompted the NRC to dispatch a team to investigate what happened and why. The NRC reported on 14 such near-misses in 2012.

Our report also contains a section on commendable outcomes achieved by the NRC last year. The NRC's hosting an international conference on security last December tops the list in our book.

We also have a somewhat longer section detailing bad outcomes last year. Topping, or bottoming, that section was the latest safty culture survey of the NRC's work force. The survey revealed a huge gap between how NRC's senior managers viewed things and how the NRC's rank and file viewed them --- the senior managers seeing no problems across the board. Could explain why the NRC "tolerates the intolerable" - nothing is intolerable when you don't give a damn.

For the first time, this year's report contains a trending section with observations from the three annual reports. Special recognition goes out to the Wolf Creek nuclear plant with four near-misses in three years - it hasn't missed a year yet. Like the Wizard of Oz being re-run every year, Wolf Creek having a near-miss each year has become tradition.

Download PDF
Posted by efmr at 7:53 AM No comments: 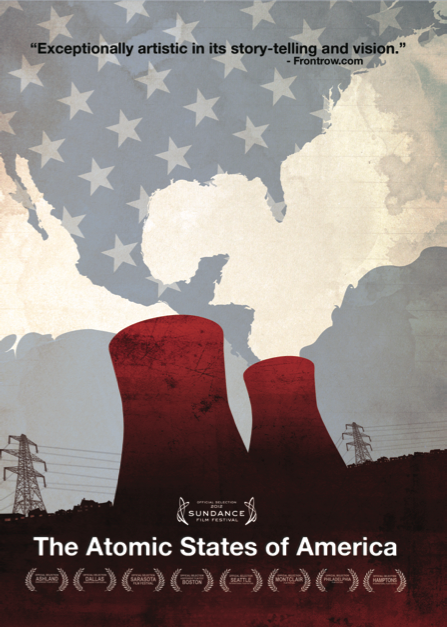 The Atomic States of America to Play in Harrisburg
The directors of a documentary that garnered rave reviews at last year’s Sundance Film Festival will bring their film to Harrisburg’s Midtown Cinema to benefit Three Mile Island Alert (TMIA) on at 6PM on Wednesday, March 27.
The Atomic States of America journeys to nuclear reactor communities around the country to provide a comprehensive exploration of the history and impact of nuclear power and to investigate the truths and myths about nuclear energy. The film introduces people who have been on the front lines of this issue for decades, including community advocates, journalists, physicists, nuclear engineers, NRC inspectors, and former government officials. Prominently featured is TMIA’s Eric Epstein, who shares insights about the industry gained over his decades of activism.
Co-directors Don Argott and Sheena M. Joyce will be on hand to answer questions about the film.
The event at the Midtown Cinema starts with a wine and cheese reception at 6PM, followed by the showing of the film at 6:30, and concludes with Argott, Joyce, and Epstein fielding questions from the audience. Tickets are $10 each and available from TMIA.